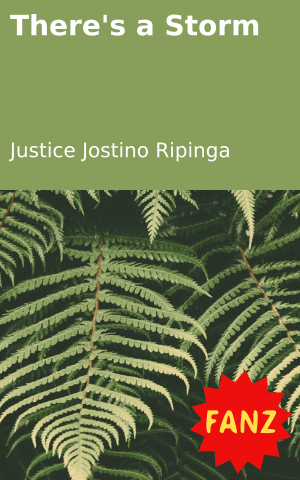 Thabo didn’t know there would be a storm tonight. The clouds were not thick and dark like they usually were every time before it rained. He is getting cold, freezing from the storm out in the streets. He has on his tattered rags and carries his cardboard boxes, which he took from the place where they throw all of the city’s waste.

The strong winds want to lift Thabo up from the streets and destroy his home. He moves from his little corner and starts running, trying to find a better place to hide his head. The flood of tears that fell down his face are camouflaged by the pouring rain. He covers his ears with his hands and ducks at the rumbling thunder of the skies. For a split second, he can’t see what is in front of him, blinded by the lightning’s brightness.

Thabo wonders how and why this is happening to him? How could his good God – the one he always praises and prays to – drown him like this? He asked for blessings and instead received storms to make worse a situation that is already bad.

Thato knew there would be a storm because Siri told him. He has his heater on and his air conditioning machine warms up the living room. He engulfs himself underneath multiple sheets of precious linen on the sofa.

Thato has his curtains open. He stares out in awe as large amounts of water fall down towards the ground. Some drops hug the window like those on the glass door of his warm shower every morning. It’s peaceful. He doesn’t hear the drops of rain falling on the roof. The thunder he can hear, it shouts so loud that he jumps in excitement and pulls his linen over his head. The lightning strikes look even better when he turns off the lights. A huge smile fills his face, he is delighted by God’s power. The rain is God’s blessings and glory.

The rain has stopped now and Thabo is relieved, but he keeps running. Shivering. Chicken skin. Top teeth grinding bottom teeth. Nose running. Maybe he can escape the horrible life he is living. Perhaps a better future lies ahead, if he could only get there as fast as possible.

He is running past many beautiful houses of Sandton. He sees better homes and thinks that maybe the people could bring him in just for the night. If only he could take a bath and get some warm clothes for the night. If only his tongue could salivate from the smell of a decent meal. And then he would go back from whence he came, he could always go back to his home.

Thato whines and gets upset at the end of such a wonderful scene. He wishes it could rain and rain for all the nights and days of the week. He didn’t get enough clips for his Instagram page and is probably going to lose a few likes for his posts. He moves his iPhone’s speaker closer to his mouth and utters, “Hey, Siri? When will there be another storm in Sandton?”

“Checking… There will be a storm in Sandton all day tomorrow…”

He snuggles underneath his linen on the sofa. The TV watches him while Thato watches his Instagram posts. He eagerly anticipates each set of three dots on the comment section to see what nice things his followers have to say.

“The beauty and greatness of mother nature!” he carefully captions his next post.

Tell us: What do you think of the contrast of Thabo and Thato’s life?