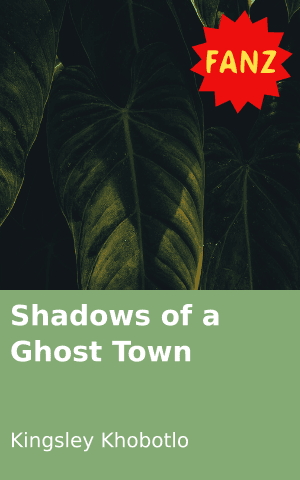 The trees in the distance dance violently in the pending storm. The old buildings and all surrounding areas are now a few shades darker, consumed by a darkness that is hard to describe. Branches start to snap. The crows have long gone. I can hear my heart pounding as if it’s about to burst out of my chest. I battle to bring my breathing under control. Just then a menacing sound fills the air.

It sounds like… a deep, slow breath, escaping from the deep belly of an unidentified beast. It’s a warning. There!

In a dark corner to my right, just beyond an old enclave designed for disposable waste, deep in the shadow of the tall trees, piercing eyes are fixated on me. As our eyes lock, everything else, for that brief moment, seems to fade into the background. The eyes are a bright red, reflective like a wild animal in the thick of the night.

Just then another pair of eyes, much like the first, appears just behind the creature, to the left. Then another. And another. Almost in unison the evil spirit that seems to live within these predators exhales deeply, as if preparing itself for a bloody assault. I jump to my feet and before I can regain my balance, my knee hits the top of the wall awkwardly, the momentum throwing me over to the other side. Adrenaline will do that you. You will clear a three metre wall, defying all logic, when your life is in mortal danger.

On the other side of the wall I hear a clawing sound, as if something is trying to get out. Then something, perhaps a stray dog, lets out a yelp and as the mauling of innocence begins. You do not need to witness the attack to know that it is merciless and gruesome. Whatever has been caught is now being dragged away into the darkness, never to be seen or heard from again. Something tells you that this innocent soul was nothing more than an appetizer and it would not be too long before the beasts would thirst for more.

I stumble my feet and hurry up a narrow pathway to the main road. Almost without looking, I cross the road and head for the coffee shop.

“You should consider yourself lucky,” comes the voice under some cardboard boxes along the pavement. I stare as a dishevelled old man with a dirty beard peers out from under an old blanket. He has a terrible scar across his left eye and looks haggard.

“You were meant to be this week’s sacrifice,” he says knowingly. My jaw drops. Although people walk by, carrying on with their daily business, the words coming out of the old man’s mouth make me feel as if we were the only two people there. Time is frozen.

Tell us: What do you think the old man means? To what would they sacrifice?

< previousintronext >
Login to Comment
5 Responses
I think the old man means that every week these a death .A sacrifice so that people can live there.
Cutie · 9 months ago
Maybe its a beast that needs to eat every year....so she was this year's sacrifice
Jerniel · 11 months ago
They what to save the town i think each year the sacrifice a person to savethe town
Death boy evil · a year ago
You know what they say "a life for a life", well actually it says " an eye for an eye" but you'll catch the throw and know what I mean🤣🤣.
Slie Kattz · a year ago
He was their sacrifice this week
Chichi83 · 3 years ago
Go to Library