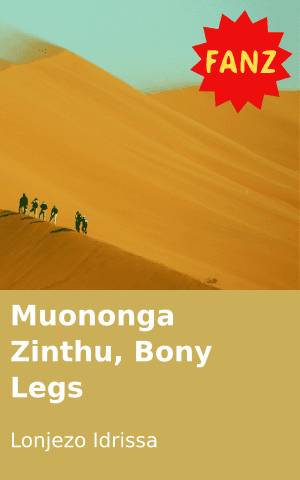 Ndaziona lived with her father and mother in a small house, near the edge of a big forest called Sapitwa.

When Ndaziona was still young, her mother became very ill and later died. Her death left Ndaziona and her father sad for a long, long time.

Soon after her mother had died, a very bad storm destroyed the vegetable garden and the small field of grain her father had planted. Ndaziona’s father was very worried; he had little money and soon wouldn’t be able to take care of his daughter. He knew that unless his luck changed, he would have to go and work in the city far away.

The very day he was married, however, a strong wind began to blow. It blew for eight days and all the new crops he had planted were destroyed. He knew now that he would have to go and work in the city because without money, he would not be able to buy new seeds or feed his family. With great sadness in his heart, he said goodbye to Ndaziona and his new wife. He reminded them never to go too far into the forest.

“It is very easy to get lost,” he said, “and I have heard that Muononga Zinthu Bony Legs, has a winter cottage there.”

Everybody knew Muononga Zinthu, she was the meanest and most cruel witch in the world. She had many houses throughout the land and it was said that nobody had ever left one of them alive.

Ndaziona shivered. She promised her father that she would listen to his warning. Then she gave him one last hug before he left on his journey.

A few days after her father had gone, a man arrived at Ndaziona’s house. In his arms he carried a small lamb.

“Your father did some work on my farm in exchange for this lamb,” he said. “He knew that you would be lonely without him and hoped that this lamb would be a friend to you.”

Ndaziona was overjoyed. Over the next week, the lamb became her dearest friend. They spent many hours playing together. Often, when her stepmother gave him long, dark looks, Ndaziona felt relieved that she had a friend.

As time went by and Ndaziona’s father had not come home, his new wife became more and more bad-tempered. Ndaziona and her stepmother had very little food left and it was almost winter. Ndaziona’s stepmother became nastier and nastier.

One day she sent Ndaziona to ask a neighbour farmer for some flour to make chikonda moyo. Ndaziona returned empty-handed and this made her stepmother furious. Ndaziona felt miserable and went outside to find her lamb. She called and called, but the lamb did not come to her. She looked all over, but could not find her lamb anywhere.

“Stepmother, have you seen my lamb? I cannot find him anywhere. It will be cold tonight and he’ll freeze to death if I do not find him.”

“Stupid lamb,” snapped Ndaziona’s stepmother, “the last time I saw him he was playing at the edge of the forest. Now stop bothering me. Can’t you see I’m busy?”

Quietly, Ndaziona went into her room to fetch her coat. She crept outside and began to walk towards the forest.

Tell us: What do you think happened to the lamb?