How are we supposed to live life? 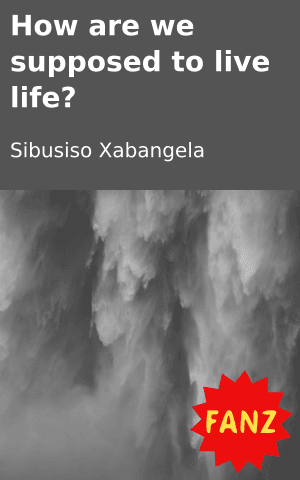 As I was waiting next to the gate, the boys showed up and they said I must go with them. I asked where we were going and they just said, “Siyovala, it will be fun. Let’s go.” I got more confused but when I asked more questions, no one answered me.

They were just rushing on the way and we kept meeting some guys that joined us. I could tell these guys were gangsters by the look on their faces. We reached Mathew Goniwe High School and we stood next to the gate. School wasn’t out yet and what I saw next made me panic.

They all took off their back packs and pulled out weapons. I had no idea what was going on but I knew it was not going to be good. Sxi, one of the guys, gave me some light as to what was going on.

“Mabheka, we are waiting for our enemies from this school, the Italian Gang. They are dangerous ntanga, so take…” he said and gave me a knife. “For self-defence, boy,” he added when I looked confused.

Shortly the bell rang. The learners came out in large numbers. I could see the Italian gang come out because they had their weapons drawn out. They came at us shouting and swearing. And the battle began.

There was blood everywhere and some guys were on the ground. I was very scared I wanted to run home but I was not sure of the way. One of the Italians came to me caring a hacksaw. He looked dangerous and desperate to take me out. I quickly took out my self-defence knife and stabbed the guy on his neck. I put my knife in my pocket as the guy fell down. I was sure the guy was dead.

Shortly after that the police showed up in all directions. Some guys ran away, some were taken by the police. I was one of them. The police took us to Khayelitsha police station. We were searched and put in a cell. We were a large number inside and I didn’t see anyone that I knew. But I didn’t panic because I knew the police took all our weapons. So there wasn’t much these guys could do to me.

After two hours, a police man came to our cell. He told us that at the crime scene they found a body of a boy dead. They didn’t have much information about the boy but one thing they knew was that he was stabbed badly on a neck.

We were taken to Cape Town prison pending the investigation; only those who were under age remained behind. We were 12 on the bus. I was very scared of what I did. I knew if they could find out it was me who had done this, it could be the end of the road for me. I hoped no one noticed it when the incident happened.

We reached Cape Town prison and I was very scared of the place. I knew some stories that happened in there. We were put in a cell called med A. It’s where new prisoners and those who are not convicted yet stay. Surprisingly Sxi was under age so he was in Khayelitsha and that’s why I didn’t see him.

I had calmed down because I meet a person I know. It was only me and him here from the Vato gang. I told him everything that I did and how I killed that boy. He calmed me down saying these things happened, we were going to be out soon.

That night in the sell, a coloured prisoner come to me asking for my pullover. I said no! He got angry asking if I knew who he was. He was the member of the 27 gang and he couldn’t be disrespected by a mpatha so I must show some respect. That didn’t convince me, so we got in a fight and he was too weak for me. I grabbed him put him down and I kicked him on his face until he bled.

In prison there are rules, one of them is if you fight, a person must bleed or surrender or the fight won’t stop. After the fight I gained respect in the room. The 28 gang called me and they told me how brave I was and that they want me to join them. The only way of joining them was doing an initiation. That meant they will give me a task, like killing a person or doing something horrible. I didn’t want to do that I told them I will think about it.

Tell us what you think: What do you think will happen to Anele in prison? What would you advise Anele at this point?

< previousintronext >
Login to Comment
6 Responses
Foolish boy,no words for him
Angelina · 2 years ago
Foolish boy who doesn't think for the future
WOLVERINE · 8 years ago
Stupid boy who is digging his own grave
*ilsean* · 8 years ago
Too bad hey
Moving+forward · 8 years ago
Anele man why you dom , like a doomed insect? Bt lets go 4 next chapter an see
Roux · 9 years ago
Load More
Go to Library