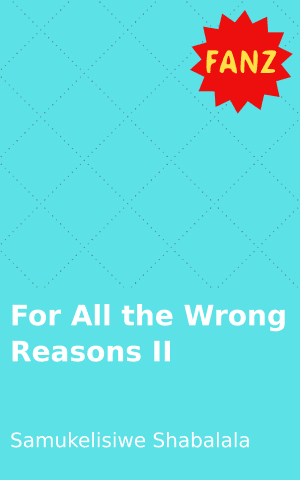 The minute we walk into Tammy’s house, she drops me on the nearby couch. “Are you married?” I slur.

“No,” she responds, then goes to make some coffee.

After a while, I stand up, walk over to her, grab her waist, and kiss her neck.

“Have some coffee first,” Tammy says, handing me a cup.

I take the cup and take three huge sips and it’s done. I then take her hand. “Please?” I beg.

Tammy nods in responds, and we kiss. I pour out my all in the kiss, including my feelings for Missy, the love for my little girl, and everything else.

The following day, we both wake up around eight o’clock. I then take a quick shower, and eat. When we are both done, she drives me to the club, and I get my car and drive to my cousin’s house. When I walk in, I find Nikiwe seated by the kitchen, reading a novel with a glass of red wine in her left hand. The lights are dim, and the music in the background is slow and soothing. She is wearing beautiful red and black lingerie, and she’s holding cufflinks.

As I walk in, Nikiwe looks up. “Oh my God,” she says, trying to conceal her embarrassment.

“No, I understand. Married couples deserve to have some fun,” I respond, laughing.

“I won’t judge you, I just need some food,” I say, then I open the fridge, grab my plate, warm it up, and leave for the cottage.

When I get to the cottage, I eat, and when I’m done, I put the plate in the kitchen inside the cottage. I don’t want to disturb the two lovers with their lovemaking, so I get on my phone and scroll through Missy’s Facebook page.

“Great. You’re not asleep,” Nikiwe says, walking in. She is still in her lingerie.

“I’m not. I thought you and Lumko would be pleasing each other by now,” I respond, laughing.

“He’s not coming home till after eleven,” Nikiwe says with a frown.

“It’s okay. Sometimes I wonder if Lumko is married to me or his job. It’s been three months since he touched me intimately,” Nikiwe says with a sigh.

“Have you tried talking to him?” I ask, putting my phone away.

“I’ve tried. The girls hardly ever see him,” Nikiwe says, then she starts sobbing.

When that happens, I figure I should take her in my arms. So, I get closer to her and cup her in my arms. She continues sobbing while lying her head on my chest, and her whole body is shaking.

“Promise?” Nikiwe asks, looking up at me.

We are very close at this point, and we are both conscious of it. Her face is tear soaked, so I wipe her tears away with my hands and hug her again.

After a while, Nikiwe gently pulls away and stands up. “I should leave,” she says.

I stand up too. “Maybe you should,” I respond. But, instead of Nikiwe walking towards the door, it’s like we are magnets attracting each other. After a while, I grab her, she turns to face me, we kiss, and one thing leads to another.

Tell us: Do you think it’s a good idea for Nikiwe and Silindile to sleep together?

< previousintronext >
Login to Comment
11 Responses
No. Bad idea. Wrong move. Terrible choice.
muziallen7@gmail.com · 8 months ago
No
Evah Thembi · 9 months ago
It's fine, it's not like there's a risk of unwanted pregnacy there, they are just releasing stress and blowing off steam, no harm done
Gemini88 · 10 months ago
No I dnt think it's right for them to sleep together it just cause more problems for Sli and his cousin who helped her so much since her release from prison .
Cutie · 10 months ago
A little bit of fun😂😂they both have their own problems
Sisiiey · 10 months ago
Load More
Go to Library