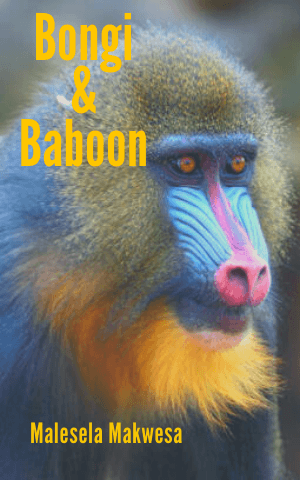 The next day Bongi sat with Sasa for lunch on the school ground. They decided to continue with the interviews after school. She told Sasa about the creepy voice but to her disappointment, Sasa laughed.

“You’re getting old Bongi,” said Sasa. “Maybe you should buy a walking stick and scare the voice next the time it comes around.”

Sasa liked joking around but Bongi did not find this funny.

“We should start early to avoid your scary voice,” Sasa said while making a frightening face at Bongi, and then laughed.

They started early indeed and before the night-time television soapy could air, Bongi was in the house already doing the dishes inside a plastic tub. When she was finished, she stepped outside to throw out the water and the atmosphere darkened after the door closed behind her. The outside light wasn’t working. She nervously looked at the two raspberry trees that stood side by side a moderate distance by their property wall. She dreaded being outside at night.

Without warning, the leaves shook slightly and the tub slipped from her hands and hit the ground with a thud. She looked up tensely at the trees. She had told herself she would never be frightened by the voice again. Her late father once told her to be brave because people don’t expect that from girls.

“Who’s there?” Bongi called out.

The trees were quiet but Bongi could sense that something up there was staring down at her. She moved towards the trees. She knew it would be safe to run back to the house but her legs, as if working on their own accord, crept on until they stopped below the trees that were woven with leaves so many they formed a roof at the top.

“I’m not scared of you,” Bongi told the trees. “Are you the one from last night?” she asked, after noticing a shadowy movement.

To her surprise, her fear was dissipating. She became convinced that whatever it was up there wasn’t going to harm her.

“If you’re scared to show yourself then maybe you shouldn’t follow little girls around,” she announced.

Moments passed before a voice spoke from the trees, “What if I’m… what if I’m scared?”

There was no mistaking it; it was the creepy voice from the other night. Bongi shifted nervously.

“I’m not a bad girl. Maybe you should climb down,” she said, and then cleared her throat – she wasn’t sure she meant that.

For a while nothing happened, then the voice returned. “What if you’ll be frightened and run off to the house?”

“Well, not quite,” said the voice hesitantly. “I’m just not what you’d expect to see around these parts –”

“Did you follow me last night?” Bongi said childishly.

“How come I never saw you? Are you a ghost?”

Bongi considered this revelation. “But you talk. Are you a maimai?”

“It’s a thief that steals children.”

“I’m not a maimai, I cannot be that,” the voice protested. “I like children, the thing is, I’m not sure they’ll feel the same way about me.”

There was a pause, then the voice said something unexpected. “I’m a baboon.”

At first Bongi’s heart skipped a beat then she giggled so much she had to put her hand on her mouth.

“You must be funnier than my friend Sasa. You can’t be a baboon,” Bongi disagreed. “We don’t have them around here, they stay in the zoo.”

“Bongi! Bongi!” another voice shouted from the house. It was her mother.

“I must go, maybe you should come back tomorrow,” Bongi told the baboon before turning on her feet. But something crossed her mind for she stopped and looked up into the branches.

“Just don’t stay up there.”

Without warning, the kitchen door opened clumsily and light fell on the stoop outside.

“Get back in here, what’s taking you so long!?” Bongi’s mother scolded from the doorway.

With some speed, Bongi picked the tub and approached her mother, then brushed past her and into the house. Mother remained standing, her eyes scanning the yard as if to locate the fishy smell troubling her. She retired back inside.

Do you think it is really a baboon speaking to her?

< previousintronext >
Login to Comment
3 Responses
It could be
Stephenolatunji123@gmail.com · 9 months ago
Its hard to tell
N.N. Siliga · 9 months ago
No I think it's a spirit of her late father
We are · 10 months ago
Go to Library