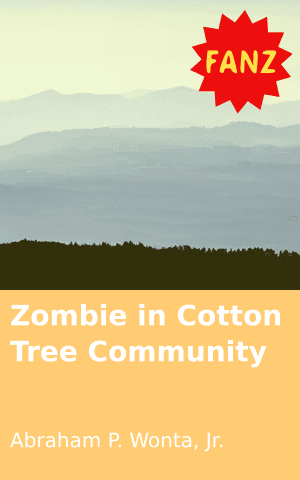 Heaving heavily and drearily dragging his feet, the zombie approaches the woman in the house. Gina hears his steps outside. She jumps up from the bed and looks through a hole. There he stands, looking vicious and wicked. He lurches left and right, then steps towards the house. Gina runs for a spear. He pushes the door open and enters. She climbs through the window and falls to the other side with a thud. Snow appears right before her.

Snow: You cannot run away from me!

Gina: What is wrong with you?

Snow: Hahahaha! I am hungry and bloodthirsty! (Blood drips from his teeth.)

Gina: When did you start eating flesh and drinking blood?

Snow: Does it matter? Come here! (He takes a few steps towards her. She screams and raises the spear.)

Gina: (Trembling.) If you come any closer, I will kill you. Where are you from?

Snow: I am from under the Cotton Tree. You set me free when the ant bit your boyfriend. For thousands of years, I have been there, waiting for somebody to set me free and today I am free! Hahaha! But no, I am not absolutely free. After tonight’s sacrifice, I will leave this stupid body and control my own.

Gina: (Holding the spear with both hands) Which Cotton Tree?

Snow: The one where I’m going to sacrifice you.

Gina: (She starts to cry) Why Snow and me?

Snow: Because you set me free.

Gina:? How can you be so selfish? You killed my boyfriend and now you want to sacrifice me? You wicked demon!

She throws the spear but she misses him. He screams, grabs her and carries her on his shoulder. She calls for help. He hits her on the head and she becomes unconscious again. At 5:43 p.m., he is at the Cotton Tree. He builds an altar. He places her there and strips off her blouse, leaving her in only a bra. He sets a huge fire ablaze a few metres away from the altar. He starts to invoke and chant. In her unconscious sleep, she dreams the same dream she had earlier. The old man repeats the same words to her: “The only way to get rid of him is with the flower friend of the cotton tree…” Nelly crawls out from the back of the bush. She can hear him loud and clear from where she is.

Snow-Zombie: (In a loud and fearful voice.) Today, I get to be a true zombie! I am back to who I was many years ago! (He raises the knife).

Nelly throws the spear at him. It sticks into his right hand. He throws down the knife and groans in pain. She immediately runs to him and kicks him near the fire. She lifts Gina and runs some distance away. She lays Gina on the ground and quickly starts to revive her. Gina awakens.

Nelly: Let’s run away! He was about to kill you!

Gina: Wait! The dream! The old man said we could kill him!

Nelly: I am not good at interpreting dreams.

Gina: He said that we could get rid of him with the flower friend of the Cotton Tree. We need to find it!

Nelly: I will stop him! Go and find it!

Gina: I don’t know what a flower friend is!

Nelly: Neither do I! Look, we don’t have much time!

Snow-Zombie staggers to his feet. He is so angry. Nelly moves towards him with the spear. He jerks it from her and breaks it. They get into a fistfight. He overpowers her and throws her to the ground. He sits on her stomach and wrestles to bite off her face. She bars him by holding his two hands. Gina checks amongst the flowers standing closer to the Cotton Tree. She is sure that the peculiar flower is the sunflower. She picks a few, runs to the zombie and sprays them on him. There is no effect. The zombie is still trying to bite off Nelly’s face. Nelly is gradually giving in. He is almost close to her face.

Gina picks up a short log and hits the zombie on the head. He loses his grip on Nelly, but he is still sitting on her stomach.

Gina runs closer to the tree. She studies it from top to bottom. The zombie and the woman are still in a tussle. This time, she lies on her side. His only desire is to grab her with his mouth. Gina sees a green shrub with a pink flower, standing just two metres away from the Cotton Tree. She jumps but she cannot reach it. On the second jump, she falls. On the third jump, she misses it. Finally, she jumps again and it lands in her hand. She runs with the flower towards them. The zombie punches the woman’s face. He licks her face, but as soon as he moves to put his teeth on her face Gina throws the flower on him.