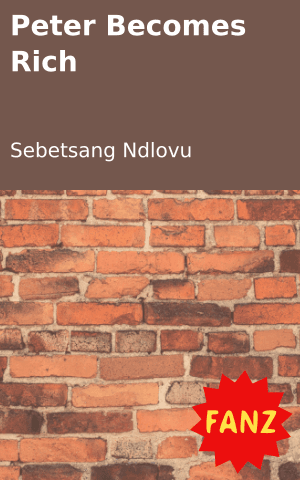 Man: Peter there is my home. For you, wait here. I’ll be back.

Peter: You are going to call him?

Man: Yeah! For you just wait there. (Calls his neighbor)

Peter: Try to be fast man. My father is waiting for the cow.

Mr. Luthuli: Okay, what can I do for you?

Mr. Luthuli: (asking himself) There’s a little boy who wants a cow? So tell me. Where’s the boy?

Man: I said to him he must stay behind the bush because if I come with him he might get bitten by your dangerous dogs.

Mr. Luthuli: Just call him. I want to see that you’re sure or not.

Peter: Mr. Luthuli I heard that my father’s cow is in your kraal. Is that true?

Mr. Luthuli: You are right boy that is true. But before I give you a cow, just go and tell your father that the cow is at Mr. Luthuli’s house and he wants R500.00 for it. Just go home right now.

After two minutes, on the way

Peter: Leona what the hell are you doing here?

Leona: Do you know this?

Peter: Wow! A diamond. Give it to me, I’ll show my cousin first, not my mom because she will throw it away. Let’s go boy.

Leona: Did you get the cow?

Peter: I didn’t get it. But I know where it is now.

Leona: It’s better if you know it. Take that diamond. It’s yours. We are friends.

Peter: Hey cousin what are you doing here and where is my aunt?

Sifiso: You don’t see that I’m washing my cap and your aunt is at her friend’s Mazulu.

Peter: Okay, let’s forget about that. I’m here to show you this. I don’t know what to do with it.

Sifiso: Wow! A diamond. Give it to me please. I’m going to be rich and famous.

Peter: No, you aren’t going to be like that. This is my diamond.

Sifiso: Hey, get out of my house now!

Peter: No, I won’t do that. This is my diamond, so you must give me my diamond. Otherwise I’ll call the police.

Sifiso: Oooh! Poor boy, you didn’t know that all the police if this country have been moved to another country?

Peter: Okay, let me leave you, but there is a policeman I know named Thami, who can arrest you. For now, let me leave. But Thami will see you.

After two hours they are in Peter’s home

Peter: Dad, forget about the cow. Just give me a cell phone. I want to call the police.

Dad: Hai! The police for what now?

Dad: A diamond? I don’t believe you. What about the cow?

Dad: What a lot of money!

Peter: So you will let me borrow a cell phone? I want to call the police now.

Peter: Hello I’m Peter Stevenson. I have a problem here.

Thami: What’s your problem, Peter? Tell us. We are the best police.

Peter: Police, my cousin took my diamond. And there’s Mr. Luthuli who stole my father’s cow. When I asked for the cow back he wanted R500.

Thami: Wait, you said who stole your diamond?

Thami: It’s your cousin Sifiso? Okay, let’s start there. Where did you get that diamond?

Peter: I dug it over the soil when I was looking for my father’s cow.

Thami: I hear you now. Hey would you tell me in what direction?

Peter: Okay. The one who stole my father’s cow lives by the Johnson shop and the one who doesn’t want to give me my diamond back leaves near the clinic.

Thami: Thanks boy. Now let me go to them.

After five minutes they are at Mr. Luthuli’s home

Mr. Luthuli: Who are you? What do you want?

Thami: We are the police, open the door.

Thami: Here is the search warrant but we are not here to search. We just want the cow you stole from Peter Stevenson.

Mr. Luthuli: Let me go to show you my cows.

Mr. Luthuli: Here they are, but you can’t take any of them.

Bongani: You’re right my friend. Let’s take him to jail. Hey get in the car, who do you think you are?

Thami: Ah okay, let’s do this. Go with this guy and I’ll call Themba to come with his bakkie and trailer.

Thami: “Hello Themba, it’s your friend Thami. I want to say will you come with your trailer?”

Themba: Okay my friend, what can I do for you?

Thami: My friend, I want to put this cow in your trailer.

Themba: Okay let’s put it on quickly because I have a job to do at home.

Thami: Nice boy, now will you help me with something else? I want to arrest someone here.

Themba: You mean that the person you are going to arrest is going to get in my car?

Tell us: Will Sifiso give the diamond back? Would you?